On 13th of October at The Grand Ballroom UT-HO, United Tractors celebrated its 43rd anniversary. The anniversary celebration also marked as the closing event of UT’s Value Innovation Championship 2015. The event was attended by UT’s Board of Commissioners, Board of Directors, and the company’s founding fathers.  Highlights of the event was the announcement of Anugrah Adibrata 2015 winners.

With the theme ‘’Unyielding Determination!’’ the celebratory event emphasized the importance of positive thinking. President Director of United Tractors Gidion Hasan said ‘’UT’s 43rd anniversary is a momentum for us to strive and be persistent in facing business challenges.”  He also said in his speech that everyone needs to implement this in their everyday behaviour in order to anticipate the upcoming changes. The same message was also conveyed by Prijono Sugiarto the President Commissioner of UT and Teddy Rachmat, one of the founding fathers of United Tractors.

On this occasion, UT employees demonstrated their talents with duet, choir, dance, and also percussion performances. At the same time, the founding fathers took an office tour of the new building of UT Head Office. Upon the closing of the anniversary celebration, the event was continued with the announcement of the winner of Anugrah Adibrata 2015, for best innovations. There are five categories of innovations: INTIM, IMUT, I-BITE, INDI, and LISA. The event was closed by the announcement of Best Employee Championship 2015, an appreciation for the best performing employees.

PT United Tractors Tbk (“UT”) today reported the Company’s operational performance for the first half 2015 that showed a decrease, while financial performance was slightly increased.

The Company’s consolidated net revenue as of June 2015 recorded a decrease by 9% to Rp24.95 trillion compared to Rp27.53 trillion in the first half 2014. However, the favourable US Dollar exchange rate had helped to slightly improve the Company’s net profit, which was recorded at Rp3.41 trillion, a 4% increase compared to the corresponding period last year.

Construction Machinery segment recorded a decrease in Komatsu sales volume by 38% to 1,375 units from 2,207 units. The decrease remains due to the ongoing subdued market conditions and the delayed realization of most infrastructure projects. On the other hand, the amount of spare parts sales and heavy equipment maintenance services increased by 8% to Rp3.10 trillion, due to the need to maintain the life cycle of heavy equipment. Overall, total revenue of Construction Machinery business segment during first half 2015 recorded a decrease to Rp7.29 trillion or down 14%.

As of June 2015, the Construction sector contributed 33% of total Komatsu heavy equipment sales volume, followed by mining sector which contributed 32%, the forestry sector by 21%, and the remaining 14% by plantation sector. Komatsu was able to maintain its market leader position in heavy equipment sector with the domestic market share of 38% (source: internal market research). Due to the sluggish mining activities, sales volume of other products were also dropped. UD Trucks fell from 94 units to 53 units, while Scania products declined from 242 units to 188 units.

PT Pamapersada Nusantara (Pama), the Company’s subsidiary in Mining Contracting recorded a 9% decrease in net revenue amounted to Rp14.74 trillion from Rp16.20 trillion on the corresponding period in 2014. This result was due to decreased coal production volume from 56.4 million tons to 51.6 million tons mainly due to higher rainfall during first quarter 2015, with overburden removal down 8% to 372.3 million bcm from 403.9 million bcm.

On 11 May 2015, UT through its subsidiary, PT Karya Supra Perkasa (KSP) acquired an additional 10.1% shares in PT Acset Indonusa Tbk (ACST) from  PT Loka Cipta Kreasi and PT Cross Plus Indonesia, therefore possessing 50.1% share ownership of ACST. ACST is a public company in the field of construction services and listed on the IDX with the trading code ACST.

On Monday, 22 June 2015, coinciding with the 488th anniversary of DKI Jakarta, PT Transjakarta has performed the inauguration Scania Euro 6 articulated buses, which is mediated by PT United Tractors Tbk (UT), 20 units of a total of 51 units as Transjakarta fleet. This event was held at west plaza of Monas, Central Jakarta and attended by Basuki Tjahaja Purnama, Governor of DKI Jakarta Province; Antonius NS Kosasih, Director of PT Transjakarta; Gidion Hasan, President Director of UT; Loudy Irwanto Ellias, Director of UT; and other honorary guests. Articulated bus Scania Euro 6 is expected to be ready to operate in July 2015.

In his speech, Jakarta Governor has expressed his happiness over the realization of the launch of Transjakarta new buses. The provision of the new buses is expected to give a world-class comfort at an affordable price to the public. Next year, the provincial government will launch another 51 units of Scania Articulated buses to be operated in Jakarta.

Scania Euro 6 articulated buses that are operated for Transjakarta is also supported by UT Guaranteed Product Support. UT ensure the availability of spare parts, mechanics and repair services to maintain the viability and productivity of these buses. In addition, contact center UT Call 1500 072 is also ready to provide Scania service assistance that is accessible 24 hours a day. 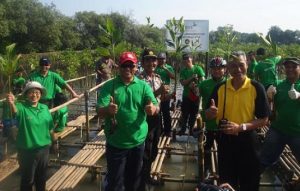 This activity is a manifestation of UT’s commitment to build awareness and actively  participating in understanding the importance of environmental conservation. Historically, since 2012 until the end of 2014, UT group has planted about 91,000 mangroves in Jakarta, covering Pantai Muara Tawar as well as Cengkareng Ecotourism area. Mangrove planting target in 2015 is 50,000 trees, starting with 10,000 trees that were planted that day.

In addition to 10.000 mangroves planting, voluntary activities were also held on that day. A number of UT group employees were participating to conduct mosque renovation, cleaning up, fogging, as well as medical check-up and free medication for 120 Segara Jaya residents. 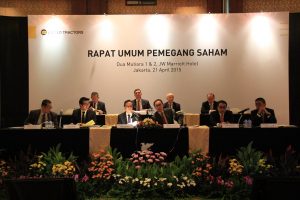 Appointed member of the Board of Directors of the Company for the term of office 2015-2017, as follows: